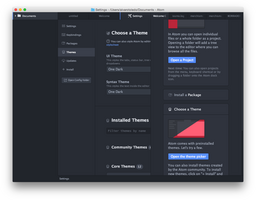 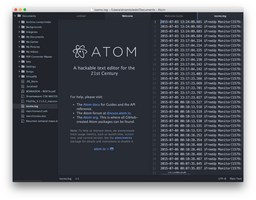 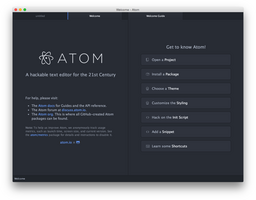 Advertisement
GitHub is one of the biggest software development communities on the Internet. Atom, in turn, is an open-source text editor that can be used as an IDE for a plethora of programming languages, and its capabilities can be extended enormously thanks to the community's continuous support.

Atom contains all the features you could ask for in a code editor, like syntax highlighting, language autodetection, a context autocomplete system, the possibility of using different panels and organizing your project into folders, snippets support, and a powerful search tool. It greatest capability, in any case, is its environment's modularity when it comes to installing packages that add more features. It should also be noted that it includes the Git version control system for publishing on the GitHub platform.

Atom is multiplatform (Windows, Linux, and Mac) and allows for cross-platform use on your projects. Its customization is its best asset: at the time of this writing, there are more than 2,000 packages and 600 themes. Given this tool's level of customization and the quantity of features it comes with, we're looking at one of the best development environments to be found today, with the incentive that it's more lightweight than other alternatives.
Reviewed by Álvaro Toledo Translated by Robert Zant
Advertisement

Nice program is there a manual in German? N nand if no, too bad! n nQuestion: How can you change the language of the user interface?

XAMPP
Apache, PHP, MySQL and Perl all in one package
Android Studio
The new programming environment for Android
Apache NetBeans
Java, C and Ruby application development from your Mac
Code::Blocks
DE for C++ that includes the MinGW compiler.
Visual Studio Code
A multiplatform code editor from Microsoft
TextWrangler
An advanced text editor based on regular expressions
Algodoo
Learning and inventing has never been so funny
MySQL Workbench
A visual design tool for MySQL databases